Rough Go For The Jeffer Last Week at Accord…

Posted on August 10, 2014 By jeffheotzlerracing

After a disappointing 13th place finish in the “Battle of the Bullring” 52 lap feature event at the Accord Speedway on Wednesday night, The Jeffer and the Academy Transmission team looked to rebound on Friday night.

The Jeffer rolled off the starting grid for the 30 lap feature in 12th and after a few quick yellows in the early stages of the race, found himself within the top 10 with only a handful of laps scored.

On an ensuing restart, a car was spun in the middle of turns 1 and 2 who was running in the top 5, leaving the rest of the field with no where to go. Unfortunately, The Jeffer and the 2a received the most damage in the incident, folding up the front end, ending the night early.

This week is another busy one as The Jeffer as he looks to gain some ground on the Short Track Super Series point leader Andy Bachetti, as the series rolls into the Penn Can Speedway on Tuesday, August 12th. On Friday night, we’ll be right back at the Accord Speedway, looking to shake off last week’s disappointment.

See you at the races! 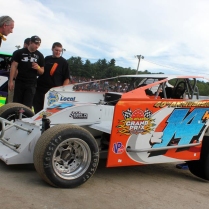